I was up at 6:30 this morning; this seems to be my normal waking time, even though we moved our clocks ahead one hour last night. I got to bed a little earlier than normal and got my customary 6 hours of sleep. We dropped anchor about a mile off shore from Alter do Chão around 7:15. The ship started tender operations at 8:00 AM. Kay and I went to the Lido deck for a light breakfast. When we arrived we found the ship had instituted cautionary measures because a number of passengers have been affected with a gastrointestinal virus. As I mentioned yesterday, Carl, Janet and David were suffering from the bug. I am happy to report that they are all much better today and have again rejoined normal activities. The measures instituted in the Lido buffet includes no self-service, stewards are serving all food that is not self contained. Also we were told that in the formal dining room, bread and butter would be served rather than placed on the table. Currently these are the only changes made, the library and all other public areas remain completely accessible. It is our understanding that currently the outbreak is mild and management is taking these precautions to keep the outbreak from becoming widespread. Sanitation is heavily emphasized throughout the ship. With all the Purel hand sanitizer dispensed, I think I should buy some stock! I have followed several blogs over the past year of longer cruises and this seems to be the norm rather than the exception. Despite all the precautions taken, when you have this many people living this closely and debarking at various ports with the exposure there, you are bound to have an outbreak of GI virus.

Alter do Chão (“Earth’s Alter”) named for its flat, altar-like hill, faces a shallow bay. The charming community of small cottages has plenty of leafy palm trees to complete the picture of a tropical paradise and to remind you that you are surrounded by one of the richest and most bio-diverse jungle settings in the world. The muddy Amazon seems a world away – the white sand and blue water of the Rio Tapajos looks Mediterranean. Kay and spent about 2 hours ashore. We mostly just walked thru the small town, took a few photos and purchased a single souvenir, a small ceramic vase which cost 5 Reals, about $3.00 US.

The Prinsendam from shore

Lacquered piranhas, you can get these everywhere, buy my understanding is they eventually rot! 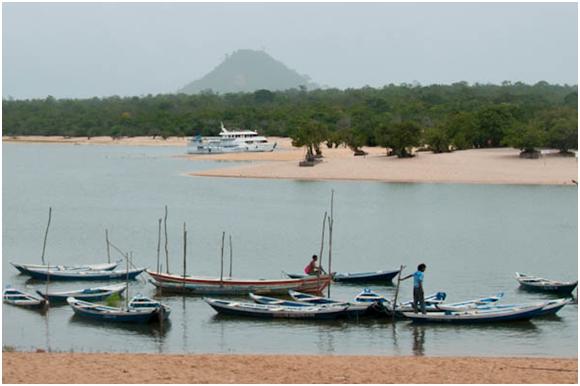 A couple of scenic photos of local boats

When we returned to the ship, we stopped by the Java Bar and picked up a couple of cappuccinos and I got a couple of smoked salmon thingies, smoked salmon on toast with a ring of onion. We carried these to our veranda and enjoyed the view while enjoying our coffee and snack. As I am writing this, Kay is still outside working on her daily Sudoku and I notice that it is raining, something it does at least twice a day in this region of the world, but hey, we are still in the rainforest! It is almost noon and time to go eat again; yes they seem to torture us this way….

We had a relaxing afternoon. After lunch Kay, Janet and Sandra went to the theater to see a movie, The Greatest staring Pierce Bronson & Susan Sarandon. I spent the afternoon reading on the veranda and taking a short nap. After dinner we attended the evening show, Larry ‘Link’ Linkin a swing clarinetist. He was phenomenal. He played, accompanied by the Prinsendam band, a selection of classic and jazz pieces that were a pure pleasure to listen to. Speaking of the Prinsendam Band, they are amazing. They are required night after night to accompany an incredible variety of performers. The type and style of music spans anything you can imagine. They have a very limited time to rehearse with the performers and are still able to perform magnificently. I believe the audience has grown to have a greater appreciation for the band than for many of the ‘stars’ who they accompany. By listening to the band night after night we have recognized their talent and versatility. In fact, by request, the band has begun to give mini concerts prior to the main entertainment on many nights.

Another feature of the Prinsendam which is outstanding is the Library. It consists of several rooms and contains thousands of volumes of everything from reference material to current and classic fiction. Also current periodicals are available. There are also a number of computer terminals available for those who do not have their own laptop. Wireless internet is available throughout the ship. It is my understanding that reception is better in some locations than others, but I am fortunate; our cabin has excellent signal strength and I normally do my computer work in the cabin. Occasionally I will go down to the Explorer Lounge just for a change of scenery. It is very comfortable and quiet there. Here are a couple of photographs of the library. 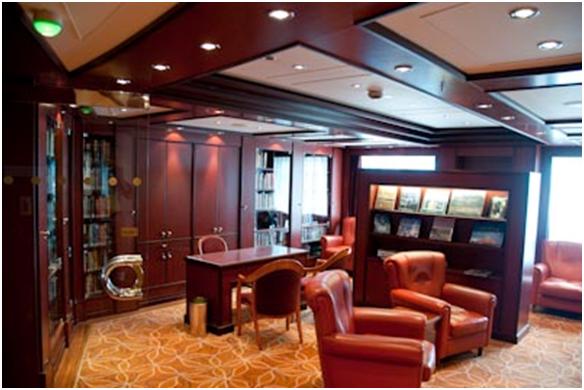 The next two days are sea days. I will keep you posted….