Just after dinner this evening we rounded Cape Horn. Cape Horn is infamous as one of the most dangerous shipping passages in the world. The fierce sailing conditions in the Southern Ocean, the geography of the passage itself, and the extreme southern latitude of the Horn combine to make this passage the most formidable in the world. Cape Horn lies at an extreme 56 degrees south. The prevailing winds here can blow from west to east almost uninterrupted by land. The latitudes here have been nicknamed the “roaring forties”, the “furious fifties”, and the “screaming sixties” and although ships traveling east tend to stay not far below 40 degrees south latitude, rounding Cape Horn requires ships to press south to 56 degrees south latitude, into the zone of the fiercest winds. These winds account for large waves which can attain enormous size. When these waves encounter shallow water south of the Horn, it makes them shorter, steeper and more dangerous. Part of Cape Horn’s notoriety is due to the “rough waves”, which can reach heights up to 100 feet.

Fortunately for us today, the winds were fairly calm and the waves mild by Cape standards. For the previous several hours we have been under gray skies and light rain. About an hour before reaching the Cape, the skies open to some blue with sunshine streaming through the clouds. The rain stopped and we had beautiful viewing conditions.

Many of us came topside to enjoy the scenery. The temperature was a mild 46 degrees and after the captain turned the ship east to round the Cape, the wind was behind us and since we were traveling at about the same speed as the wind, it was almost nonexistent. It made for very pleasant viewing.

During the last several days HAL has given us several nice gifts. We received a matched set of mittens, scarf and wool cap. We also have received two very nice maps; one of Antarctica and last night one of the southern Chile Fjords and surrounding areas. These were large 24×36 inch folding maps on quality paper. Tonight we received two sets of designer postcard depicting cruise ships. We have been finding gifts left on the bed almost nightly for the past week. It is reaching the point that we are not sure how we will get them all home!

In addition to the gifts, our cabin stewards always leave a different and unique towel animal for us to enjoy. I don’t believe we have had a repetition in the entire 42 days of our cruise.

By the way, I did get a haircut today. It was done by Samantha, a pleasant young lady from South Africa. Samantha has been on the Prinsendam for 2 years, without taking a vacation. She said it’s like being on holiday all the time! She is leaving in March with us when this cruise ends for a visit home. She then intends to continue working with HAL, either back on the Prinsendam or the Amsterdam. Oh, the cost of a haircut was $25.00 (plus tip), not too bad when you have a captive clientele. 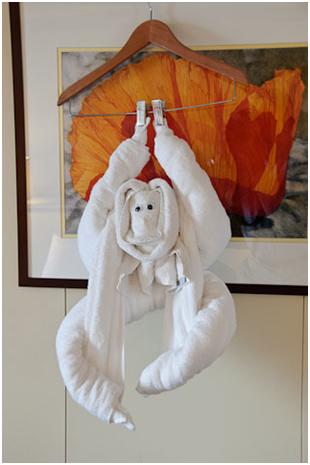 Monkey our animal for tonight

Kay and I with the Horn in the background 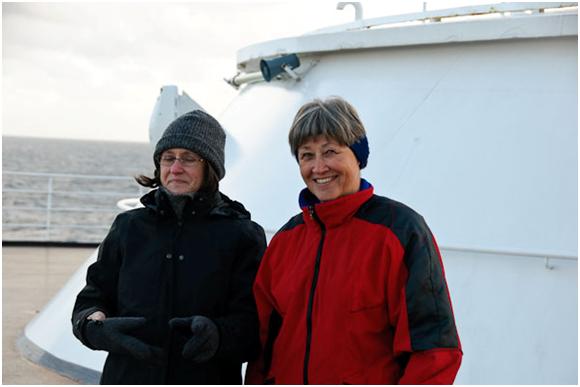 Kay and Janet bundled up, but the conditions were not as bad as expected

Our Captain on the wing Bridge 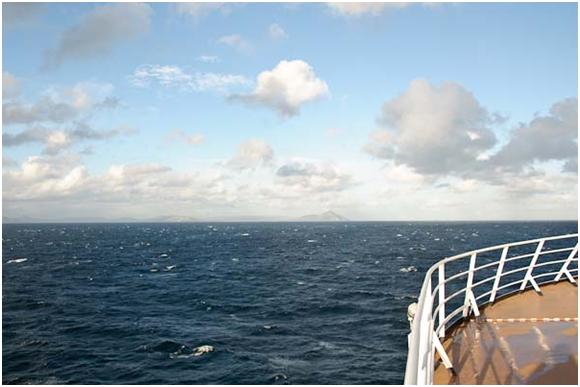 The ship has turned northeast, heading for the Beagle Channel which we will enter around midnight tonight.