Below is a collage of photographs from this beautiful and colorful city. 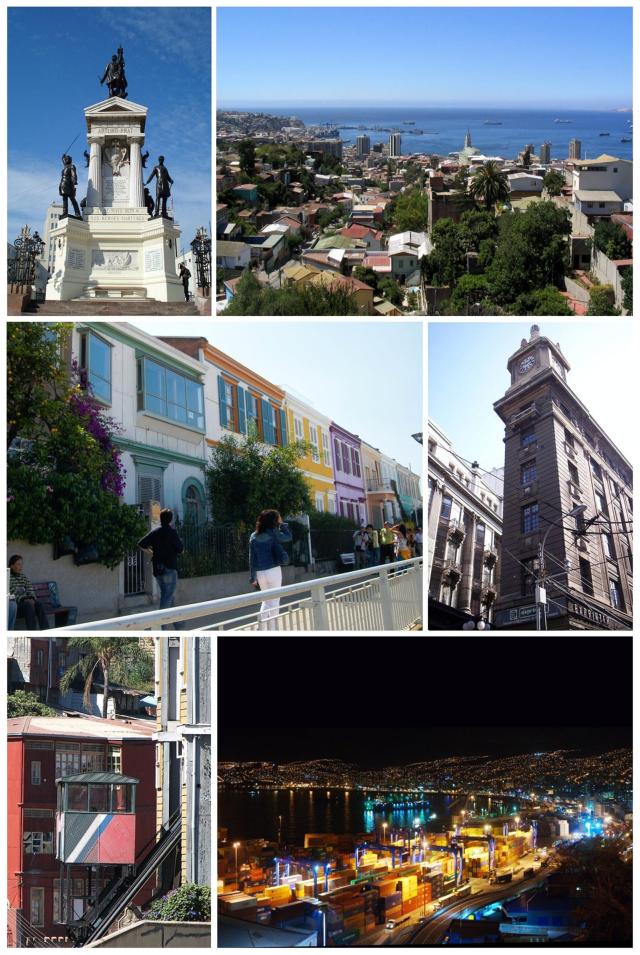 Valparaíso is a city and commune of Chile, center of its third largest conurbation (Greater Valparaíso) and one of the country’s most important seaports and an increasing cultural center in the Southwest Pacific hemisphere. The city is the capital of the Valparaíso Province and the Valparaíso Region. Although Santiago is Chile’s official capital, the National Congress of Chile was established in the city in 1990.

Valparaíso played an important geopolitical role in the second half of the 19th century, when the city served as a major stopover for ships traveling between the Atlantic and Pacific oceans by crossing the Straits of Magellan. Always a magnet for European immigrants, Valparaíso mushroomed during its golden age, when the city was known by international sailors as “Little San Francisco” and “The Jewel of the Pacific.”

Examples of Valparaiso’s former glory include Latin America’s oldest stock exchange, the continent’s first volunteer fire department, Chile’s first public library, and the oldest Spanish language newspaper in continuous publication in the world. The opening of the Panama Canal and reduction in ship traffic dealt a staggering blow to Valparaíso, though the city has staged an impressive renaissance in recent years.

Though nearby San Antonio has taken the reins as the country’s most commercially important seaport (greater tonnage moved), the City of Valparaíso remains a vibrant center of Chilean culture, and the Greater Valparaíso metropolitan area (which includes Valparaíso, Viña del Mar, Quilpué and Villa Alemana) has the third largest concentration of population in the country after Greater Santiago and Greater Concepción. Valparaíso’s bay was probably first populated by Picunches Indians, who were dedicated to agriculture. Other accounts say that it was the Changos Indians who were nomads dedicated to fishing traveling between Caldera and Concepcion. Spanish explorers arrived in 1536, on board the Santiaguillo, a supply ship sent by Diego de Almagro, who is considered the first European explorer, or discoverer, of Chile. The Santiaguillo carried men and supplies for Almagro’s expedition, under the command of Juan de Saavedra, who named the town after his native village of Valparaíso de Arriba in Cuenca, Spain.

During Spanish colonial times, Valparaíso remained a small village, with only a few houses and a church. After Chile’s independence from Spain, Valparaíso became the main harbor for the nascent Chilean navy, and opened to international trade, which had been limited to commerce with Spain and its other colonies. Valparaíso soon became a required stopover for ships crossing between the Atlantic and Pacific oceans, via the Strait of Magellan and Cape Horn, and gained particular importance supporting and supplying the California Gold Rush (1848–1858). In its role as a major seaport, Valparaíso received immigrants from many European countries, mainly from Britain, Germany, France, Switzerland and Italy. German, French, Italian and English were commonly spoken among its citizens, who also had newspapers in these same languages.

International immigration transformed the local culture from its Spanish origins. Football was introduced to Chile by English immigrants, and the first private catholic school in Chile was founded by French immigrants in Valparaíso: Le Collège des Sacrés Cœurs (The Sacred Hearts School) which has been operating for about 170 years. Immigrants from Scotland and Germany founded the first private, secular schools, (The Mackay School, and Die Deutsche Schule respectively). Immigrants also formed the first volunteer fire-fighting units (still a volunteer activity in Chile), while their architecture reflected various European styles, not just Spanish traditions.

The golden age of Valparaiso’s commerce ended after the opening of the Panama Canal (1914), as most ships sought to avoid the Strait of Magellan, and the port’s importance and use was reduced substantially. Traffic has increased in the last few decades with fruit exports, increasing opening of the Chilean economy to world commerce, and Post-Panama ships that do not fit the Panama Canal.

We arrived in Valparaiso about 11:00 AM on Wednesday. Kay, Carl, Janet and I had a private tour which I had scheduled on the internet before leaving home. David and Sandra were doing a HAL tour of a winery and horse farm. We met our guide and driver at 1:00 PM at the customs terminal. This was not as easy as it sounds! Valparaiso is one of the busiest ports in South America. After we docked and were cleared by customs, it was necessary to board a shuttle and be transported over a mile though the docks to the terminal building. Once we were on our way with our guide Jackie and driver Marlene, we had a great time. Jackie is a native of Chile, who lived in Australia from age 2 to 15, thus she spoke excellent English. We had a combination driving/walking tour of Valpo and Vina del Mar. We stopped along the way for a quick light lunch. Valpo is a beautiful city and is much larger than I thought. It has a rich cultural heritage in the arts which is apparent everywhere you look.

For my photos I am concentrating on the graffiti art and the Ascensors (elevators). The Ascensors are a major means of transportation for the people between the lower and upper levels of the city. I was fascinated by these carriages which were built in the late 1800’s and are still in operation. I believe there is in excess of 20 Asensors in the city, but currently only about 16 are in operation. Each one basically consists of two wooden cars with windows which are mounted on a rail track at a steep angle up the hill. As one car ascends the hill the other car descends. The one way fare is 300 pesos, about 75 cents. 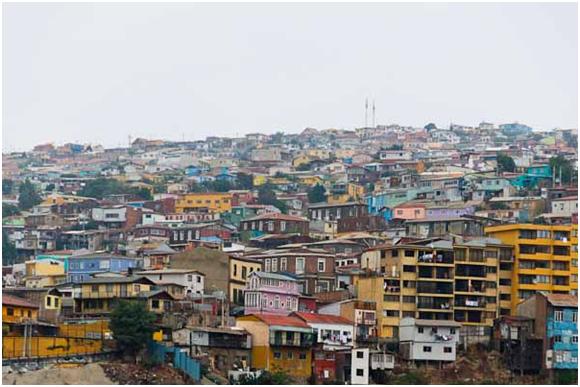 These are is couple of photos of the hillside homes. With all of the earthquakes in the area, you wonder how they stay in place!

We met Juan Valdez on the street.

Now for some street art. It was everywhere and not done is a disfiguring way. There was some very well done artwork and it was respected by not being marked over. 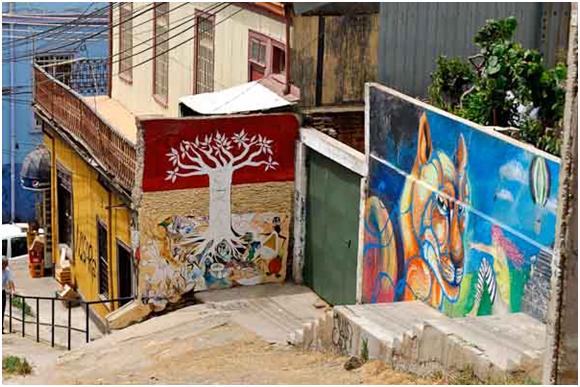 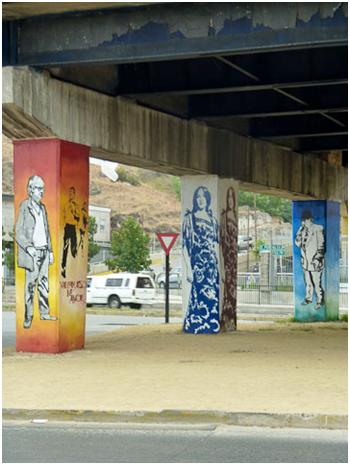 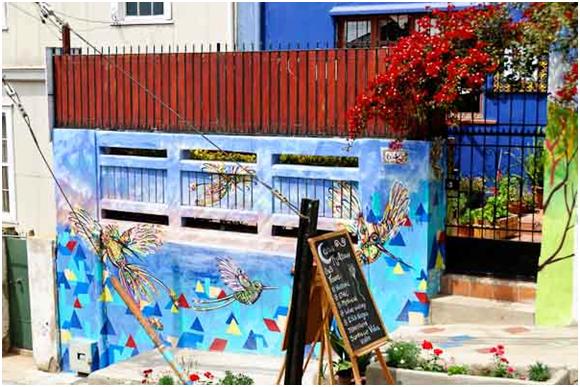 The art was not just on the street, but everywhere. While walking we needed to make a bathroom stop. Our guide spoke with a vendor near the top of one of the acensors. She graciously allowed us to go downstairs into their private area, where they obviously occasionally entertained. The walls were covered with drawings and we had a beautiful view as well. We could even see the Prinsendam.

We visited the home of a local artist and here even the refrigerator was decorated! 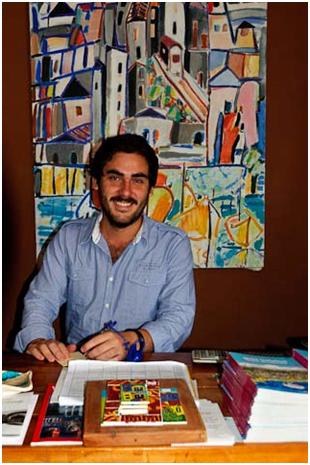 A beautiful tile mural in a small courtyard outside his home.

The next few photographs are of one of the Asensors we rode. This is Asensor Artileria. 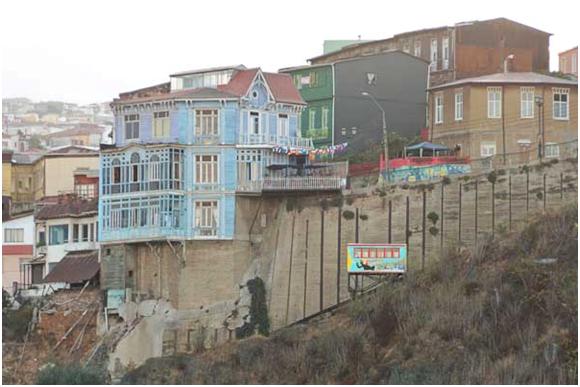 This photograph was taken from our veranda on the ship. Note the blue Asensor in the lower right of the picture. The blue building has a restaurant on the middle floor where we ate. There are more photographs of the restaurant later. 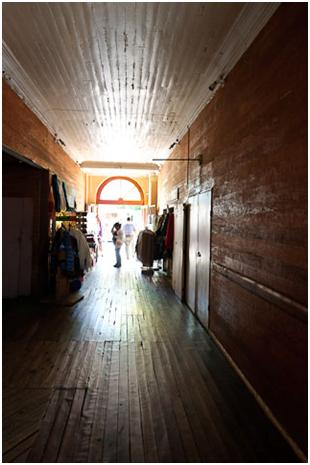 Entry to the elevator, looking back to the street

Inside the car, note cracks in the floor! 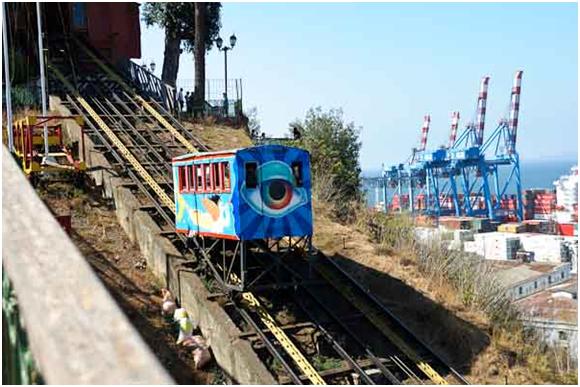 The restaurant taken from the elevator car, kinda scary! 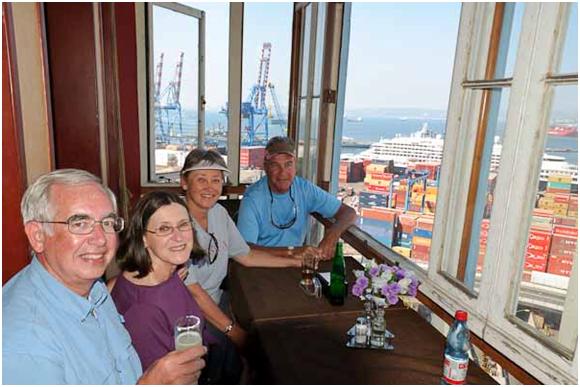 This photo was taken in the restaurant. I am having a Pisco sour and we are literally hanging over the cliff above the ascensor. You can see the Prinsendam in the background. We had scallops and cheese empanadas the best ever!

One of only three genuine Easter Island icons ever removed from the Island. 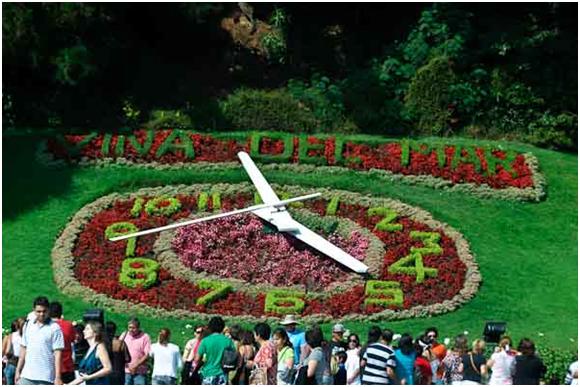 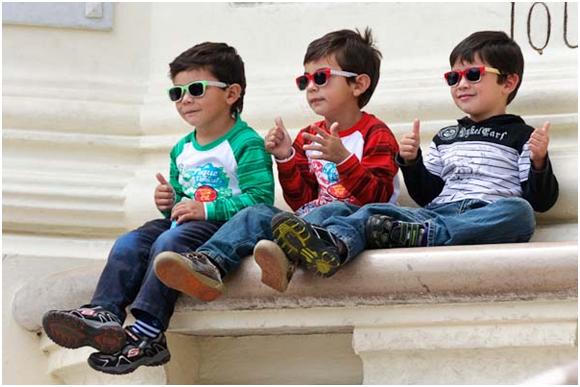 Except for a few… A rare site, not very many homeless were seen in Valparaiso or anywhere else in the Chilean cities we visited. I am sure Santiago has a larger problem; I will have to ask David and Sandra, they went there today.

Yokee, one of our evening waiters enjoying a break between dinner seatings

The dock at night with the city in the background.

A great time was had in the City of Valparaiso!