We arrived in Ushuaia at 7:00 AM. Our luck with the weather continues to hold. It was obvious even before dawn that it was going to be a beautiful day. 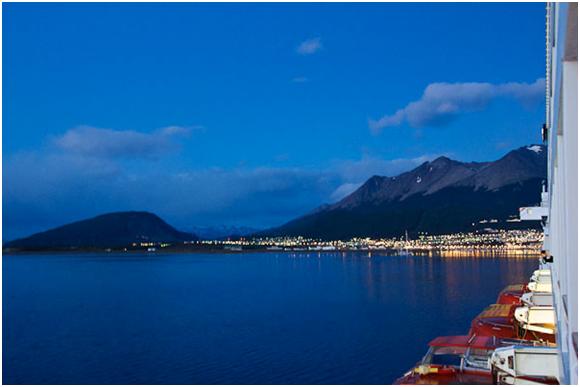 Dawn in Ushuaia, the small city is still lit up 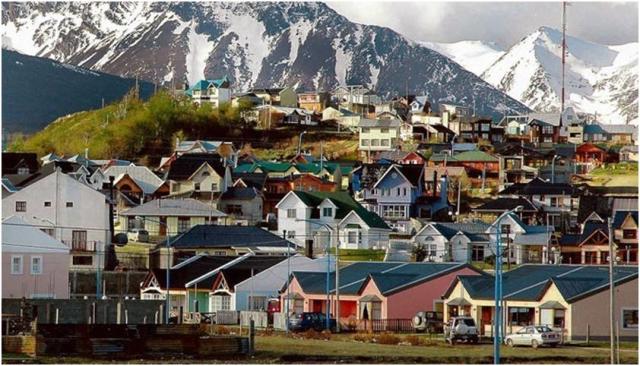 This is a file photo of the town

This is my photo, most of the snow is gone except in the higher elevations since we are at the start of summer.

Below is a lot of history and background information about Ushuaia, the city which claims to be the “southernmost city in the world” although there are two other contenders. Puerto Williams on the Chilean island of Navarino is actually further south but only has 2,400 inhabitants. Punta Arenas, in Chile, (our next port), is much larger but farther north. There are also several continuously inhabited settlements further south of Ushuaia however these settlements have fewer than 100 residents and cannot be considered “cities”.

Please feel free to bypass this background if you would like.

The British ship HMS Beagle under the command of Captain Robert FitzRoy first reached the channel on January 29, 1833 during its maiden voyage surveying Tierra del Fuego. The city was originally named by early British missionaries using the native Yámana name for the area. Much of the early history of the city and its hinterland is described in Lucas Bridges’s book Uttermost Part of the Earth (1948). The name Ushuaia first appears in letters and reports of the South American Mission Societ] in England. The British missionary Waite Hockin Stirling became the first European to live in Ushuaia when he stayed with the Yámana people between the 18th of January and mid-September 1869. In 1870 more British missionaries arrived to establish a small settlement. The following year the first marriage was performed. During 1872, 36 baptisms and 7 marriages and the first European birth (Thomas Despard Bridges) in Tierra del Fuego were registered. The first house constructed in Ushuaia was a pre-assembled 3 room home prepared in the Falkland Islands in 1870 for Reverend Thomas Bridges. One room was for the Bridges family, a second was for a Yámana married couple, while the third served as the chapel.

During 1873 Juan and Clara Lawrence, the first Argentine citizens to visit Ushuaia, arrived to teach school. That same year the Argentine President Julio Argentino Roca promoted the establishment of a penal colony for re-offenders, modeled after one in Tasmania, Australia, in an effort to secure permanent residents from Argentina and to help establish Argentine sovereignty over all of Tierra del Fuego. But only after the Boundary treaty of 1881 between Chile and Argentina did formal efforts get underway to establish the township and its prison.

During the 1880s, many gold prospectors came to Ushuaia following rumors of large gold fields, which proved to be false. On the 12th of October 1884, as part of the South Atlantic Expedition, Commodore Augusto Lasserre established the sub-division of Ushuaia, with the missionaries and naval officers signing the Act of Ceremony. Don Feliz M Paz was named Governor of Tierra del Fuego and in 1885 named Ushuaia as its capital. In 1885 the territory police was organized under Antonio A Romero with headquarters also in Ushuaia. But it was not until 1904 that the Federal Government of Argentina recognized Ushuaia as the capital of Tierra del Fuego.

Ushuaia suffered several epidemics, including typhus, pertussis, and measles, that decimated the native population. But because the Yámana were not included in census data the exact numbers lost are not known. The first census was held in 1893 with 113 men and 36 women living in Ushuaia. The prison was formally announced in an Executive order by Roca in 1896. By 1911 the Yámana had all practically disappeared, so the mission was closed. The population grew to 1,558 by the 1914 census.

In 1896 the prison received its first inmates, mainly re-offenders and dangerous prisoners transferred from Buenos Aires but also some political prisoners. A separate military prison opened in 1903 at the nearby Puerto Golondrina. The two prisons merged in 1910, and that combined complex still stands today. It operated until 1947, when President Juan Perón closed it by executive order in response to the many reports of abuse and unsafe practices. Most of the guards stayed in Ushuaia, while the prisoners were relocated to other jails farther north. After the prison closed, it became a part of the Base Naval Ushuaia (Spanish), functioning as a storage and office facility until the early 1990s. Later it was converted into the current Museo Maritimo de Ushuaia.[20]

During the first half of the 20th century, the city centered around a prison built by the Argentine government to increase the Argentine population here and to ensure Argentine sovereignty over Tierra del Fuego. The prison was intended for repeat offenders and serious criminals, following the example of the British in Tasmania and the French in Devil’s Island. Escape from Tierra del Fuego was similarly difficult, although two prisoners managed to escape into the surrounding area for a few weeks. The prison population thus became forced colonists and spent much of their time building the town with timber from the forest around the prison. They also built a railway to the settlement, now a tourist attraction known as the End of the World Train (Tren del Fin del Mundo), the southernmost railway in the world.

When we arrived and docked, one of the first things I saw was this beautiful yacht. The Octopus. 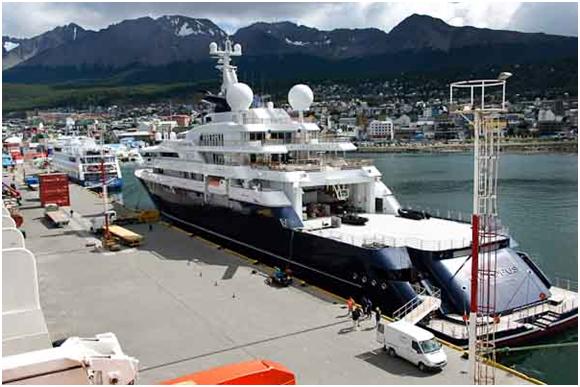 I soon found out this ship belongs to Paul Allen, the co-founder of Microsoft.

Here is some info I found about the Octopus.

Octopus is a 414 foot (126 m) megayacht owned by Paul Allen, the co-founder of Microsoft. Delivered in 2003, it was believed to be the biggest such yacht at the time of its construction. It is currently the world’s 11th largest super yacht, the third largest superyacht not owned by a head of state.

Octopus sports two helicopters on the top deck (one in front and one on the back), and a 63-foot (19 m) tender docked in the transom (one of seven aboard). The yacht also has a pool, located aft on one of her upper decks, and two submarines (one of them operated by remote control for studying the bottom of the ocean). Side hatches at the water line form a dock for jet skis.

On January 31st 2011 one of the helicopters of the yacht had to perform an emergency landing on the water just after it took off from the yacht whilst sailing in Ushuaia, Argentina. According to an Argentine Coast Guard officer, no casualties were reported and the aircraft had not leaked oil on the sea.

Our guide today had already told us about the loss of the helicopter, but we have been unable to find out if Allen is here with the ship, or what it purpose her is. Apparently it has been in out of Ushuaia a few times recently.

Well, it would be nice to be able to sail on a private yacht like the Octopus, but I guess I better get back to reporting what I can afford to do J.

Kay and I arranged a trip through HAL which was advertised as the “4X4 Road Safari The Lumberjack Trail”. It included a “snack” and you must be physically fit. Maximum passinger weight 280lbs.

Interesting description. We boarded six persons per 4×4 vehicle, with a total of 4 vehicles. We left the dock area about 8:15 AM. We immediately left town and started up Highway No. 1, the main highway from Ushuaia. Well actually, it is the only highway from Ushuaia. Our guide explained it was the land lifeline of the city. In order to travel anywhere else in Argentina, the locals must take this highway and cross into Chile travel a number of miles and then take a 30 minute ferry ride to reach Argentina again. They are completely cut off from mainland Argentina.

After about a 20 minute ride we stopped and took some scenic photos while our guide showed us on a map where we were and where we were going.

Here is our guide, a native Ushuaian, who spoke very good English. He said English is taught in high school and they are beginning to teach it in middle school.

What a beautiful view. In the summer months (now) they get a lot of visitors who come for the trekking cross country and cruise ships. During their winter month this is a very popular area for cross country skiing.

After about another 10 minute ride, we veered off the highway onto a dirt track. 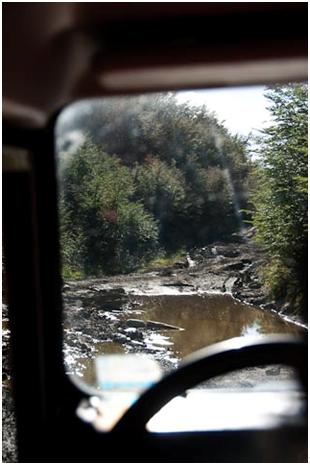 We had a pretty wild and sometimes exciting ride, but it was worth it for the views. 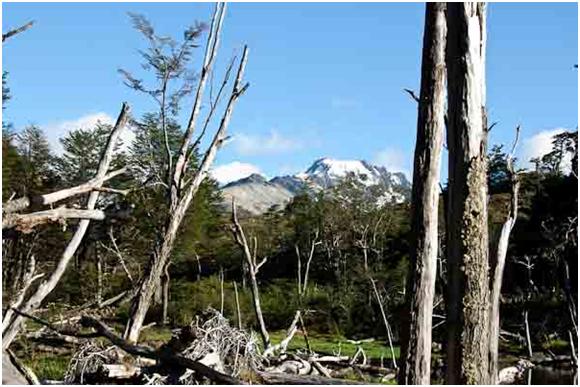 Our guide explained that beavers were a serious problem in the area. At sometime in the past they were imported from Canada. They have no natural enemies here and do a tremendous amount of damage.

After getting back to Highway No. 1 we travel for a short distance to a lodge which hosts hikers during the summer and skiers during the winter. In this photo of me, you can see the woods in the distance where we are going. Our destination is into the woods below the mountain slope. We again take the 4×4’s to the edge of the woods and then have short 10-15 minute hike into the woods. 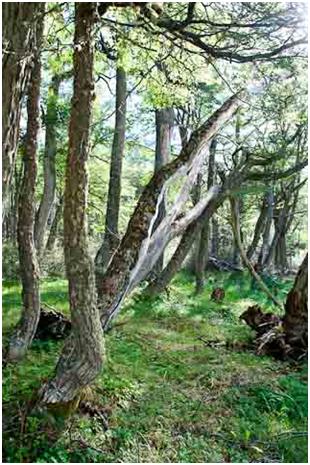 We arrive at an area which is actually used as a camp for wood cutters farther up into the mountains. There is a nice little cabin where a stove fire has been prepared. We are served an Argentinean steak prepared in a large cast iron pot along with a stew of potatoes, onions and peppers. It was accompanied by bread, cheese and wine. It was quite a meal in the middle of the woods and was very good.

That’s Kay on the left at the table talking with a couple from Quebec.

We then hiked back out, loaded up and made our way back into town and the ship. We had an early sailing, this being a short stop in Ushuaia. We would have loved to spend more time in this charming little city at the bottom of the world, but additional adventures beckon us.

We had a short rest, and then it was announced that the Prinsendam reached the first glaciers in the Beagle Channel. That was at about 4:00 PM. It is now about 9:00PM and the incredible views have been nonstop. We stayed on top, at the observations deck for about an hour and a half, until we were almost frozen, then had dinner. Kay went to tonight’s show while I write the blog and enjoy the beautiful, ever-changing view through the veranda windows.

I have the names for the different glaciers, but for now I am just going to post some more photos. We have a stargazing session with one of the ship’s officers at 9:30 tonight if clouds permit.

Enjoy the photos. We are in Punta Arenas, Chile tomorrow and have a trip planned to Otway Sound to see more penguins….. 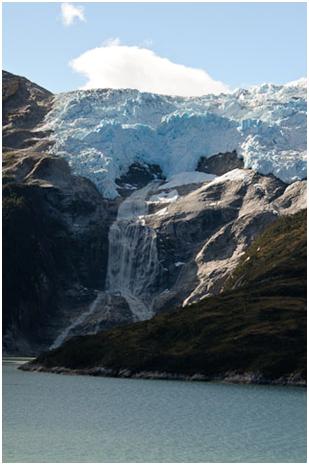 Waterfall from a glacier melt 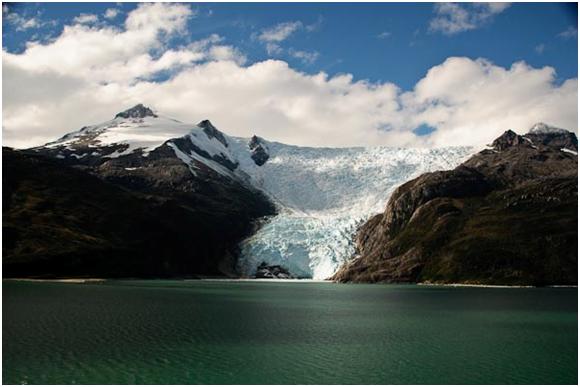 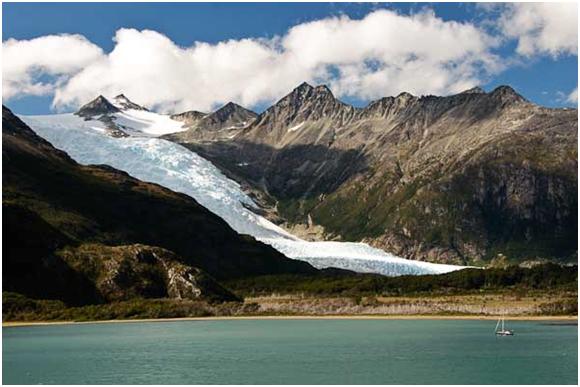 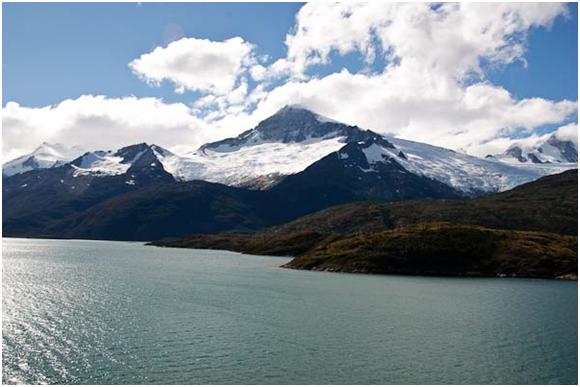 View up the Beagle Channel